Last month I organized a dojo for the architects of my company. To become a software architect in my company, you need to be very highly skilled software developer first. Consequently, even thought, we still write code as software architect, I don’t think this is the most critical skill to practice anymore.

I decided to practice with them some kind of discovery process.

Two weeks before the dojo I started spending some time exploring ideas related to Data driven systems. I started with Data driven because a lot of companies are selling data and we are very used to consume and buy data in various forms. It can be as newspaper, watching Netflix or tv. The business is not very hard to guess: those companies usually make people pay to access all or part of their content. From there, I sent an invite to the architects with a subject to study: 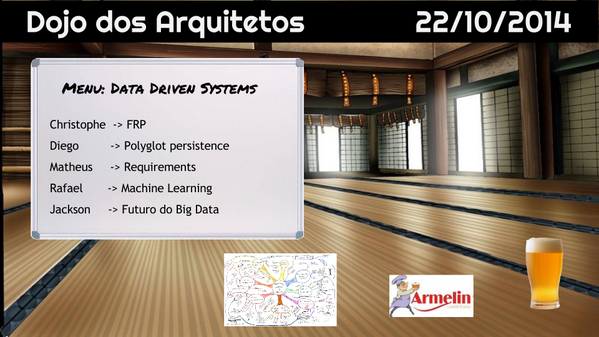 The idea is that everybody study everything, but ultimately focusing on the subject that has been assigned to them. I have chosen those subjects because they appear in the mind map I started when studying Data driven system

I asked for everyone to start drawing some mind map showing the kind of requirements we should expect in such a system, problems that will probably raise from those requirements and kind of architecture that could handle those problems. We spent 25 minutes on this activity. Then, one by one, we exposed our mind map to others and started to discuss. The main value of this exercise is the discussion as they usually have a very high quality. We ended discussing on:

At the end we started to build a mind map without linking the subjects as this can still be considered as a draft.

It was fun and generated a lot of interesting dicussions. We are now better prepared to work with data driven system and got some practice on extracting concepts based on the nature of a problem.